When I was in middle school, a small community of Trinidadian, Guyanese, African-American, Nigerian and Indian Muslims rented out an office space adjacent to a church to serve the local Muslim community with a center for classes and prayer. Both church and office were parts of an old shopping plaza with the largest space being an abandoned supermarket.  The plaza was on the border of an old low-middle income neighborhood and not too far from major highways. The abandoned supermarket had provided shelter for dealing drugs and other nocturnal activities that had menaced the neighbors for some years.

When the Muslim congregants decided to move their growing community from the small office to the old supermarket in time for Ramadan, I like to think we provided the neighbors some safety and relief.  We cleaned the blood stains in the back where the meat cooler would have been and chased out the rodents.  The walls with crumbling paint were peeled and scrubbed.  Random rusted bars, rods, and broken bottles were carefully removed as well as other piles of garbage.  The gray concrete floors were swept and washed, and families knelt and bowed on pink sheets over cardboard taped to the cold hard floor for the first few years before the floor was eventually tiled and carpeted.

Previous Ramadans, my family would break fast at home, and we would invite friends to join us for the night prayers.  During the Ramadan that the small community moved into the old-new space, my mother volunteered to prepare meals for not only our family but anyone who was present in order to break fast in community instead of at home.  I began to settle in to a routine of taking my homework to the make-shift community center, serving others, breaking fast, cleaning up, doing homework, avoiding the creepier guys scoping and then — if I felt particularly motivated — joining the nightly prayers.  Every night, the old supermarket-turned-Islamic center was brightly lit, and the large parking lot filled up with cars of attendees who were happy to have a space to meet and worship everyday and night regardless of how it initially appeared. 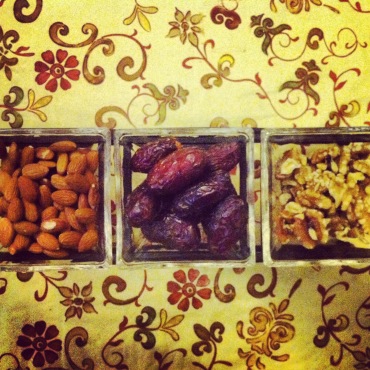 The center leaders invited someone who memorized the Qur’an to lead the night prayers and recite the entire Qur’an over the course of the month, which was something I had not ever experienced before and enjoyed immensely.  It was a part of my life I didn’t really talk about much with my friends — mostly because I wasn’t sure if they could imagine what I would proceed to describe. I had seen some of their well-made and polished synagogues and churches and their suited attendees — this didn’t come close.

The other element this small new community brought that I had not previously experienced was its vast international knowledge — its own cosmopolitanism.  In one space, I encountered the world in a way none of my peers from school could imagine and in a way our social studies classes would never manage to cover.  Those years, I learned to eat Nigerian jollof rice, Trini bus up shot and Palestinian maqloubeh. I learned from Guyanese elders about the best fresh fish that comes out of the Amazon and learned how to play cricket.  I learned that many South Asian women did not know how to pray in jama’a because they had never attended a masjid until they immigrated to the U.S.  I learned from a Pakistani-American high-schooler who addressed me as “goodie two-shoes” that Muslims also smoked pot (because the Koran only talks about alcohol not pot, man) and dropped out of high school.  I learned from an African-American high-schooler who addressed me as “teacher’s pet” that Muslims not only dated but also cheated on their girlfriends and boyfriends.  I learned Arabic from a elderly Bosnian man who always came dressed in a suit and would go out for a smoke while everyone prayed; I watched over the naughtiest Bosnian refugee toddlers talk about everything but genocide as their grandmother threatened to spank them with a slipper; I learned that the big Venezuelan family I knew from school were actually Muslims of Palestinian descent and spoke a mix of Spanish and Arabic only their community understood; I learned from a man with a large following of cats who spoke occasionally with my mother and gifted her a book because she served him iftar every night that it was possible to be literate and homeless; and I learned from an adult who broke down and sobbed in front of me when I was 12 or 13 that teaching American teenagers was not easy when you have an Egyptian accent.

During Ramadan nights, the recitation of the Qur’an filled the center and children were happy with the vastness of unobstructed running space shared by women and men attempting to worship in peace.  At that moment in time, during those first years, in that space, everyone felt safe.  It never occurred to the staff to not welcome everyone and check who walked in and out.  Thinking back, it was incredible — and perhaps incredibly naive — how safe the congregants felt.  Sometimes, if I didn’t join the prayers, I sat in the back and watched the men and women perform the rituals of standing, bowing and prostrating repeatedly.  I was often alone in my world of thoughts, but I was not lonely.  Sometimes, when other teenagers came, I listened to stories of their love lives, the latest British teen-hafiz who was completely smitten by the same young lady the last ones fell for, and their stealth rendezvous in the parking lot.   Most of the time, I felt unable to relate to the girls my age, even when one excitedly informed me that I was the love interest of not one but TWO British hafizes desperately pining away while also noting why women should not be seen at the masjid.

One Ramadan night during the evening prayers, I could not pray and decided to walk outside the Islamic center under the awning attached to the entrance.  I remember it was a particularly beautiful and windy night as I paced back and forth along the large windows looking in.  Because we did not yet have an air conditioning system installed, both sets of large doors in the front which were once the entrance and exit for the supermarket were left wide open to allow the air to circulate with the help of donated fans.  I could still hear the recitation of the Qur’an through the speaker system and because of the lights, the men and women praying and children playing were clearly visible. The imam who recited that year had a uniquely calming voice vacillating between soft tones and high notes.

At a certain point, two young shirtless white teenagers in shorts and on bicycles turned into the parking lot and began circling around two Caribbean women walking in.  They barked and howled at the women.  I stopped pacing and turned towards them.  The women weren’t shaken.  One — a grandmother — scolded the boys saying they needed to learn some manners before she entered the center.

The boys laughed loudly and again began howling and spinning their bikes.  I thought they would eventually go away.  Instead, they saw the wide-open doors, turned their bikes and rode straight through them and into the prayer space.  With their bikes, they circled the room and continued to yelp and howl as the congregants prayed and then biked out through the open doors again.

I looked through the windows once more and saw the congregants were still in prayer.

Standing still, I stared at the boys with clenched fists and felt my throat run dry.  They laughed loudly and gave each other high fives.

I kept staring them down, trying to will my stare to at least sting if not burn and pronounced under my breath, “Jack-asses.”

It was something I heard my older brother, who was away for college those years, say all the time — especially whenever he thought someone did something particularly dumb.

I had thrown punches and pens at friends only, but I hadn’t had previous experience of saying “jack-ass” much. Out loud. To someone’s face.  I was, after all, voted “nicest” and “best personality” in middle and high school, and I hadn’t met anyone at school or in my neighborhood quite like these two boys …

Slightly afraid and slightly thrilled that I found my voice, I attempted to channel my brother with a steady, matter-of-fact tone; and said a little louder, enunciating with the best Floridian accent I could muster —

“What did you say Indian girl?”

I swallowed whatever little saliva was left in my mouth.  I realized I was alone, with thick window panes that once had taped to it announcements about discounts on bananas and beef tenderloins and a wall separating me from the congregation behind it, but now that I had their attention — I remember the conversation going something like this —

They stopped their bikes in front of me. We must have been close in age.  They were 14-15 somethings, and they weren’t much taller than me.  Their parents probably had no idea where they were roaming, and they were dirty-blonde skinny shirtless white boys with exposed hairless chests.

One of the boys then pulled on his gold necklace and showed me the small gold cross hanging from it.  “You see THIS?” he pointed with one hand.  “This is about JESUS.”

“Really? Then why are you outside and not at church?” I gestured to the church next door. “Actually…I can’t imagine Jesus would be very happy with you guys acting like this.”

I later patted myself on the back for that polite comeback and beat myself up for not saying Muslims believed in Jesus, too.

“YEAH.  You think you’re real cool? You see all those people inside??  The WORLD is in there. You’ve never traveled and seen the world the way you just saw here. SO GROW UP.  JACK-ASSES.”

And suddenly, the white teenage menaces became school boys.  A look of embarrassment — maybe the look of being schooled by an “Indian girl” — flickered on one of their faces. Trying to play it off, one of the boys puffed, “Whatever. We’re leaving.”

I watched them ride away with relief.  I couldn’t believe what had just happened — but it happened, I said what I said, and I managed to walk back inside feeling slightly taller and without anyone being any wiser.  No jack-asses ever rode their bicycles through the supermarket-turned-Islamic Center ever again.

The next day, however, parents were advised to keep an eye on their children, and volunteers were asked to ensure the doors were kept closed. Not too long after, someone donated curtains to cover the windows.  Several years later, the center was tiled and carpeted, and children who played in the back reported of encounters with boys on bikes (and on foot) throwing rocks at them, the homeless man who occasionally spoke to my mother, and his cats.