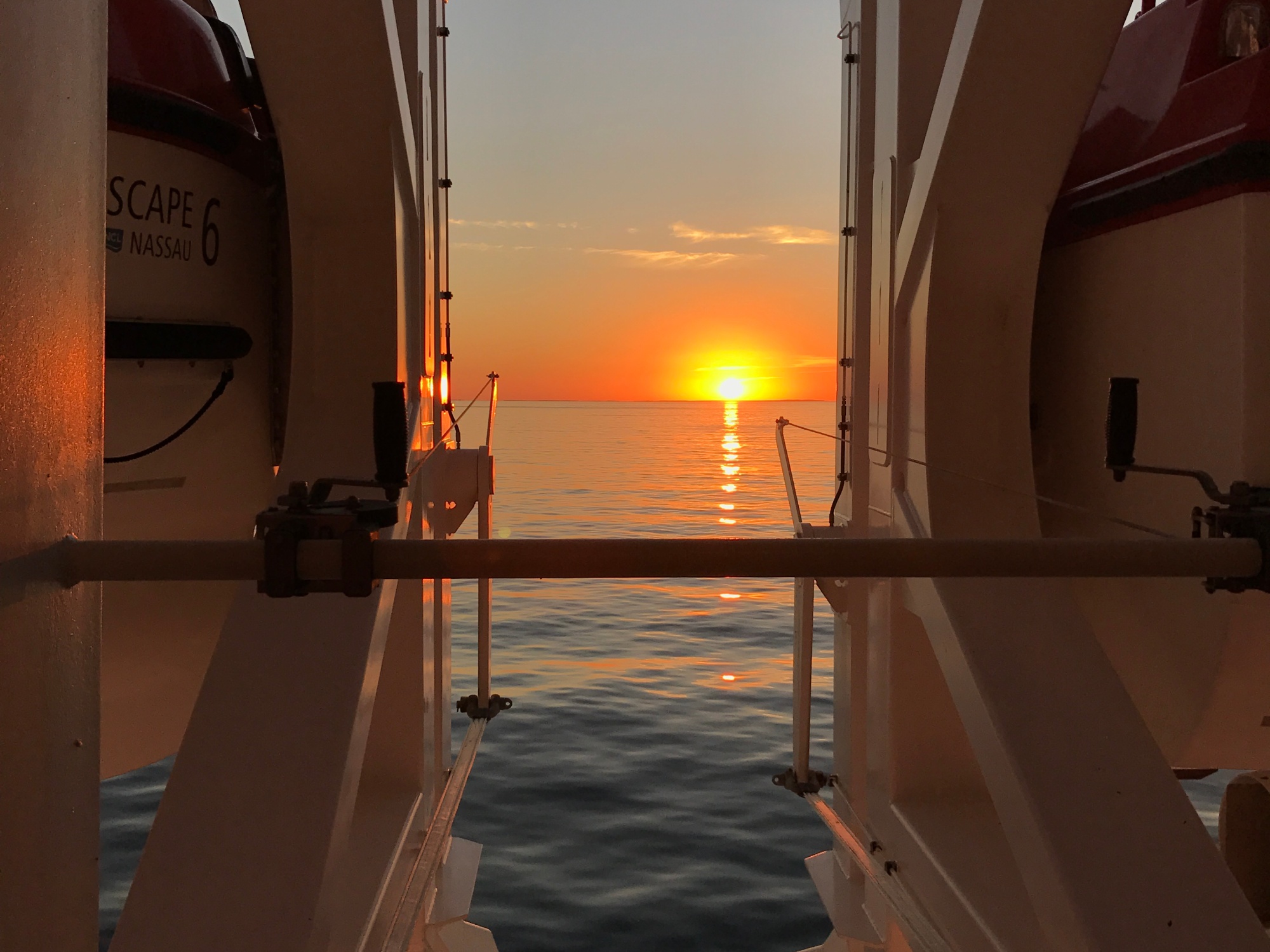 Once upon a time, the night after the 2016 elections, my husband and I boarded a cruise ship.

I was invited to give a talk at an event called “Summit at Sea.”

When I received the invitation, I was highly suspicious. I was working on completing my dissertation and applying for academic jobs (again).  By that moment, I had enough time and experience in grad school in New York City and touring Hijabi Monologues to learn that any informal invitation to work that did not offer to cover my expenses and pay me was a scam.

I learned the hard way that organizations and institutions know that with me, they can get a two-for-one, sometimes three-for-one, and even likely four-for-one deal.  Scholarship. Art. Diversity. Consultancy. Entertainment. Project Development. Public Engagement.

SO I WAS NOT ABOUT TO BE MADE A CHUMP.

I mean, if YOU were a graduate student making approximately $23-24,000 a year in Manhattan and YOU entered the job market a second time and YOU got an informal email invitation to give a scholarly talk AND perform AND YOU were visibly Muslim at a Summit-at-Sea in which the CEO of Google, Kendrick Lamar, and Quentin Tarantino as well as Patrice Cullors, Sonia Sanchez, and Dolores Huerta were to be in attendance–but the email made no promise to cover your expenses, wouldn’t you be suspicious and think this was some elaborate scam to get you on a boat after which you would be thrown overboard or sold into eternal cruise entertainment bondage?

I tread carefully. I did my due diligence. I spoke first with the former Hijabi Monologues performer and organizer who sent me the initial email. She wanted to guage my interest on behalf of the Summit organizer who expressed his interest in having me on board (PUN INTENDED). She said it was unlikely my expenses would be covered, but I could ask him.

So I spoke directly with the organizer.

He was a young Egyptian-American stand up comedian and actor. I had never heard of, met, nor spoken with him before, but on the phone, he was calm, assured, direct, responsible, respectful. After our conversation, I felt much better. He immediately understood my apprehensions. He patiently answered all my questions. He offered to be a springboard for ideas I was playing around with for the talk and gave his honest opinions. He assured my expenses would be covered and that he would send an email to the founders of the organization to confirm this.

So I asked for more time to make a decision, I looked at their website some more, and then after I received an email confirming my expenses would be covered, I finally agreed to give a talk and moderate a conversation with Muslim comedians as long as my husband could come along and that he would be covered, too.

But I was still suspicious.

The night of the presidential elections, I flew home to Florida. The day after the 2016 elections, like my dad, I felt gutted. My dad said, They don’t want us to be their bosses.

For the first time, my dad shared with me a story about his first time on the academic job market. A committee member had the moral courage to tell him after one interview that he would not be getting the job because he was more qualified than anyone on the committee, he was a man of color, he had the potential to become their boss one day, and so the others saw him as a threat and nipped that in the bud.

He eventually got a better job at Broward Community College.

Fast forward to the evening, we took an Uber to the port in Miami. Stood in line behind Quentin Tarantino and a much younger woman.  Presented our passports.  Received a few gifts. Checked in.

AND I WAS STILL SUSPICIOUS THAT I WAS BEING SCAMMED.

But then we crossed the dock in order to board the ship and arrived in a lobby-like area with elevators.  I mentally noted that another couple, standing right next to us, was also waiting for the elevators.

And then I did a double-take.

I looked at the couple–and I started humming.

“Butterfly in the skyyyyyy. I can go twice as hiiiiiiigh.”

In my mind, I turned toward LeVar Burton, in slow motion and stared.

He turned to face me and said in the warmest voice, “How are you? I mean, really? How are you?”

They just happened to skip sessions about why Black Lives Matter.

LeVar Burton asked permission to give me a hug, and then he gave me a big hug.

I tried not to cry.

And did he hear me sing “Butterfly in the skyyyy; I can go twice as hiiiiiiigh” the moment I realized who he was?

And did I tell him, “You are probably the reason I’m doing a PhD in Literature??”

And are you embarrassed on my behalf because you know OF COURSE I DID???

It was his turn to get emotional. He asked me what my Ph.D. dissertation was about. He then looked at my name tag and said, Sahar?

He introduced me to his partner, and I introduced mine. He asked what brought me on board, and I said, well, I truly thought this was a scam. But I am scheduled to give a talk early in the morning.  He told me he couldn’t attend my session although he would have liked to. What’s it about?

I told him it’s about the Prophet Muhammad in literature and art. I also told him it’s okay, and that I was really looking forward to attending his session.

Before we parted ways that night, he said I hope we bump into each other again these next few days!

By the time I was able to get to his session, it was packed with many 30-something year olds who all felt their inner child activated in the presence of LeVar Burton although he was talking about “these white supremacist motherfuckers” instead of reading a children’s book.

Somehow, hearing him call them motherfuckers was just as soothing.

There was no room so I stood in the back. The man noticed from the stage and said, Sahar! Come up front! There’s a seat here.

I sheepishly walked to the front of the room. His partner waved at me so I could see her and indicated I could sit in the seat next to her that was reserved for him.  I felt embarrassed to walk over people–but also, not gonna lie, super DUPER special, duh.

And every time we passed each other on that ship, LeVar waved and called me over by name. At one point, when I was not with my husband, he inquired about him–by name. I was touched he made it a point to remember our names, and said, “My husband is checking out the swimming pool slides.”

At some point, after eating a cup of chocolate avocado mousse, a very charming,

gracious, and handsome man asked me if I was comfortable and enjoying myself. When I whispered, “To be honest, I thought this was all a scam,” he laughed really hard, perhaps until his stomach hurt, and said, “Oh my god, thank you for that.”

He was one of the founders of the Summit.

All in all, I was not scammed. I ate well. Someone took a very unflattering photo of me during the session I moderated. I nerded out and attended a bunch of sessions on art, and performance, and writing, and compassion, while my husband checked out all the pool slides.

I got to know the young people who were tirelessly running around everywhere and making sure all the programming went smoothly and that the participants and attendees were okay. At some point, one evening, as I walked alone back to my room, a very drunk white man tried to speak with me and grab my hand. A couple of those young people working the event immediately sensed we were not friends and stepped in to help me.

And I made friends with people who still keep in touch.

When we disembarked, I stood behind another stand-up comedian and for some reason, I told her all the healthy cuisine on board was nice but I missed fried chicken. Then one fried chicken story led to another after which she finally said, Are you like some sort of halal fried chicken yelp, or something?

And that Egyptian-American comedian I had never ever heard of, the second season of his show just came out on Hulu.

BUT YOU DON’T HAVE TO TAKE MY WORD FOR IT.